How Has The Decline Of The Steel Industry Been Allowed To Happen?

How Has The Decline Of The Steel Industry Been Allowed To Happen?

(This is a promoted article)

Itâs been dominating our headlines for months, and with good reason. The decline of the UKâs steel industry has been happening for years, but the recent job losses and decline of Tata Steelâs UK operations has flung it to the forefront of our news.

While a buyout of Tata Steelâs UK operations has been announced, which may keep this one manufacturer afloat (although the outcome of the buyout remains to be seen), itâs a solution to a bigger underlying problem which has been developing over decades.

Thereâs been a number of issues that has led to this sudden collapse in the worldwide steel industry, most noticeably over-confidence and out-of-proportion investment from developed countries. With countries like China expanding their steel industry into the global market, fuelled by strong manufacturing industries, there was an idealistic vision of a rising worldwide steel industry that would only get exponentially better over time.

In his analysis, Business Insiderâs David Scutt said: China, followed by India, was going to power global steel production, creating near endless steel demand both nations transitioned away from developing to developed economies.

Capacity was installed, as were coking coal and iron ore mines used to fuel them. It was all too good to be true. New production couldnât come online quick enough. 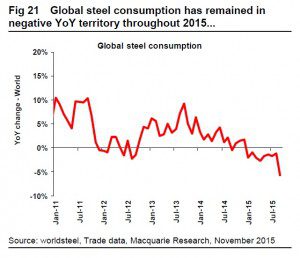 We are talking about an industry which expanded rapidly for demand which not only didnât come quickly, but increasingly looks like it might not come at all, wrote global financial services provider Macquarie in their latest report.

Many process industries have overcapacity in the world, but steelâs demand problem and relative size make it front and centre in terms wider economic impact.

They suggest that in order to bring some the global steel market into equilibrium, around 275 million tonnes of global capacity would need to be mothballed, equivalent to the current output of Japan and Western Europe., David Scutt â Business Insider

The Guardianâs Nils Pratley recently made a startlingly accurate observation about the decline of the UKâs steel industry â which has been creeping on us since the â70s.

He said: Those pressures have become intense since 2012: but the story of steel in the UK has also been one of a 40-year decline in output and employment. In the early 1970s, the UK industry was producing almost 29m tonnes and employing 325,000 people; by last year, the figures were 12.5m tonnes and 30,000 people.

This output makes the industry more expensive for those elsewhere in the industry, including construction firms and wholesalers of steel products, such as stainless steel wire rope producers Rope Services Direct.

With a fall in demand following over-confidence in the global market, this has put a decline in UK steel output â affecting financial security of businesses like Tata, as well as their jobs. Tata was recently reported to be operating at a loss of £1m per day â something unsustainable which has led to the sale of its UK operations.

In an opinion piece earlier this month, The Telegraph said: Relative energy costs are far higher in this country than elsewhere in Europe and should have been reduced under the Coalition. It was a mistake to entrust both the energy and business portfolios to the Lib Dems.

Had the manufacturers been given a level playing field at least they would have had a fighting chance to compete with a high-quality product.

Figures from a Eurostat report in the EU steel industry showed that UK steelmakers (in 2014) were paying 80% above the EU average for their electricity â driving operating costs higher, then in turn the cost of UK steel, and finally consistent losses.

Given the support and (relatively) better state of the German and other EU countriesâ steel industries, energy prices that manufacturers have to pay puts a big bearing on how successful production and sale is.

Other EU countries have protected their steel industries much more effectively; energy costs in places like Germany are about half of what they are to the UKâs steel industry and they protect their own industry by allowing high tariffs on Chinese steel, in an effort to push consumption towards home-grown production.

But in recent months the government has been reluctant to follow in the lesser duty rule for Chinese steel; back in February David Cameron was criticised for blocking EU proposals to tackle cheap Chinese products, with Business Secretary Sajid Javid backing him.

While they have agreed that current levies are perhaps too low, the EU proposals are too extreme. Mr Javid recently said: I think when we look at this, a responsible government would look at the impact overall to British industry and British jobs.

[But] we also have to remember that in the UK, as well as manufacturers of steel, there are also companies that consume steel as part of their production process, and the impact that might have on to them.

There are a lot of different suggestions flying around from politicians, industry experts, the government, the EU and those working in the industry. These include a number of solutions including government bail-out (similar to City Banks after the financial crisis), re-nationalisation of the industry, implementation of tariffs on cheap Chinese steel imports and better energy prices and business rates for UK steel manufacturers.

The government published guidelines towards the end of 2015 to suggest procurement of public-sector contracts for UK steel. Again, though, the issue points to cost; other EU countries will likely favour their own manufacturers and the cost of projects may already be too high to take on much more expensive materials â The Guardianâs Nils Pratley points to the Hinkley Point nuclear power station project as a prime example of something thatâs been identified as a big opportunity. However, how much comes from the UK will depend on competitiveness for a project thatâs already inordinately expensive â competitiveness which our steel industry just doesnât have at the moment.

Ultimately, government action and support needs to be next; regardless of what form this takes, the previously slow action to support the industry needs to be remedied so we can take lead from other EU countries and retain a strong steel industry in the UK.