Introducing Female Employees Building a Career in Construction with Sika

International Women’s Day (IWD) is an annual commemoration of the cultural, political and socio-economic achievements of women, which is why Sika is introducing some female employees to us. Taking place on 8th March, this year’s event is designed to raise awareness against gender bias and calls for ‘action for equality’.

Through a long-term commitment to equal opportunities and professional development of employees, Sika fully supports the IWD campaign to tackle gender bias in the workplace and support female employees.

To support this commitment, in 2021 Sika established a Global Diversity Steering Committee to cover diversity and inclusion initiatives, which include increasing its percentage of female employees, particularly in sales and management positions.

Sika is proud of the inclusive culture that exists across all areas of its business. Therefore, in recognition of International Women’s Day, here’s an introduction to some female employees who are building a career in construction with Sika.

“As a male-dominated industry, women may experience imposter syndrome and not necessarily be given equal opportunities. It’s not something I’ve experienced, however.”

Tracy, who has spent 22 years in the building industry, said women should feel confident enough to share their ideas on workplace practices and behaviours.

“Autonomy and drive for innovation are key drivers to empowering positive change within a business. It’s something that Sika has always encouraged during my time with the company.” 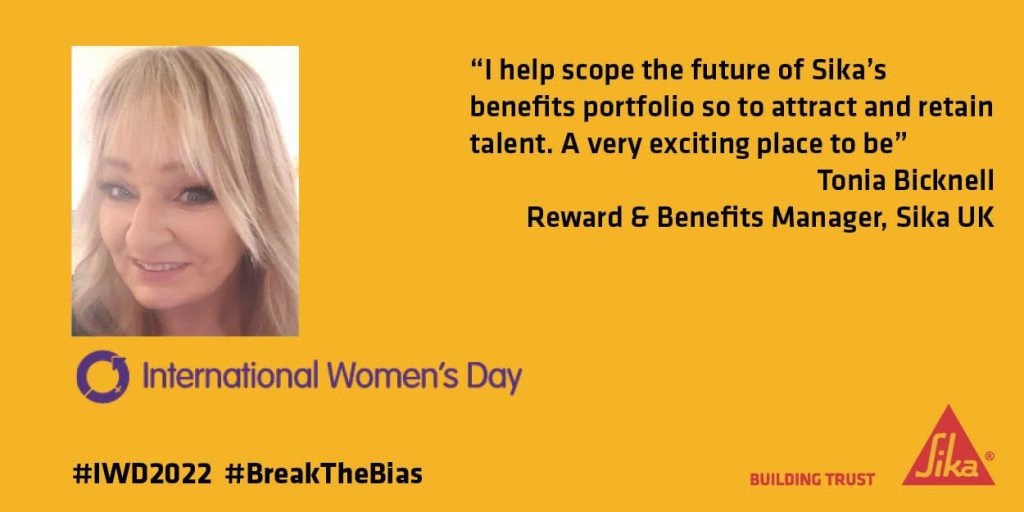 Tonia Bicknell swapped a career in retail and hospitality to become Sika’s Reward and Benefits Manager.

“I really welcomed the opportunity to work in a new industry with the fresh challenges it brings. Generally, construction remains a male-dominated industry, but Sika is committed to addressing that gender imbalance. I like its values and culture, hence I wanted to be a part of that environment. My role as Reward and Benefits Manager allows me to help scope the future of Sika’s benefits portfolio and attract and retain new talent. It’s a very exciting place to be.” 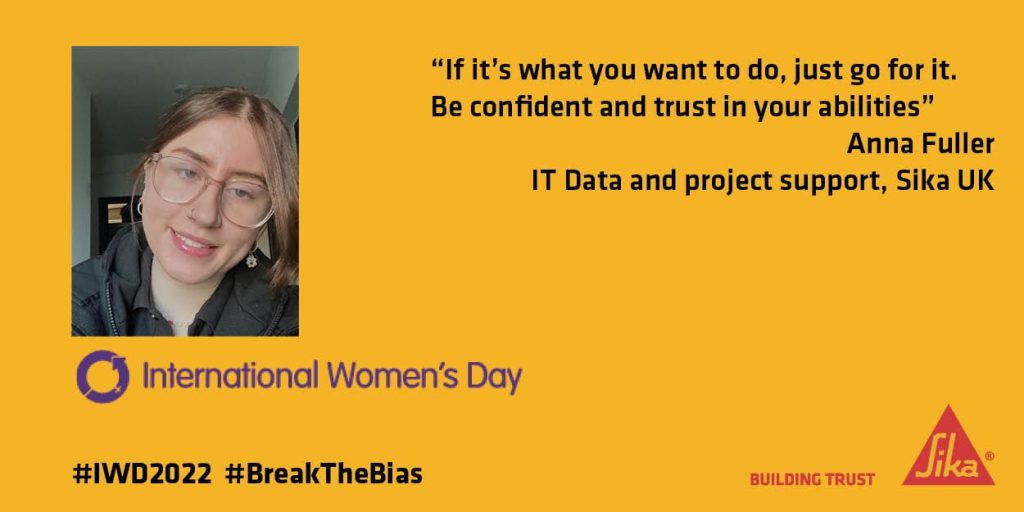 Despite being relatively new to the construction industry, Anna Fuller, who provides data and project support as part of Sika’s IT team, has already made her mark. She cites involvement with Sika’s Enewall SAP Integration Project and the ongoing Everbuild SAP Project as being a highlight of her burgeoning career. She has a message for women looking to follow in her footsteps by taking up a building industry-based role: “If it’s what you want to do, just go for it. Be confident and trust in your abilities.”

“The influence of IT will continue to grow massively in the industry, particularly as newer technologies such as VR and AI are refined, and innovate processes in planning, design and build.”

A Data Scientist within Sika’s Quality Control Department, Letitia Birnoschi has a chemistry background and ‘an inclination’ towards materials science.

As the first woman in her family to pursue a science-related career, she hopes to make the most of her current role. “My work involves developing data-driven tools for analysing data from R&D and quality control. My ambition is for these tools to become an essential part of the Sika business.” 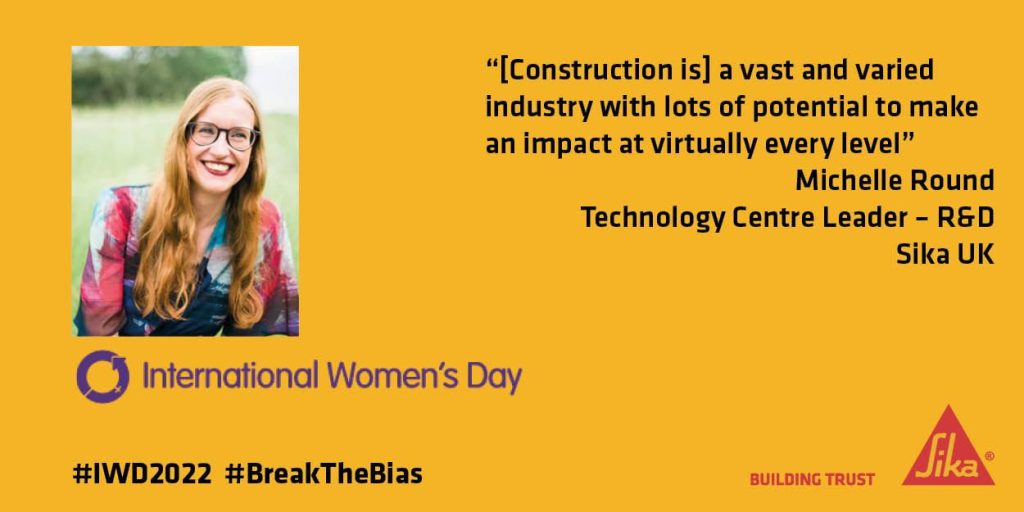 Michelle Round, R&D Technology Centre Leader, is adamant that in the workplace, gender differences should be a source of creation rather than discrimination.

“Women often think about things differently to men, and that leads to different approaches. We need diversity of thought and ideas to be able to push and challenge each other.”

Michelle’s construction-based career began by ‘luck’ when she took an industrial work placement whilst studying for a degree. She said that the building sector needed to establish an appropriate culture in order to recruit and retain more women, adding: “We still need to get more women into senior management positions. The biggest changes always come from the top and having more women there will help shape the right environments below senior management.” 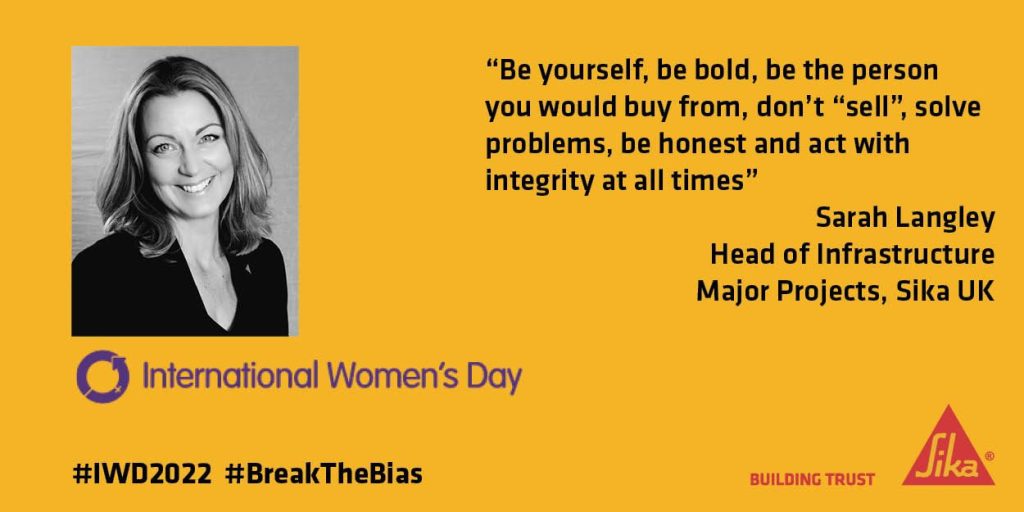 Sarah Langley would rather her gender was incidental to her role as Head of Infrastructure – Major Projects.

Sarah, whose grandfather was a roofer, said she’d inherited his practical skills. “As a child I learned to wire a plug, fix a fence, bleed a radiator and much more!” Delighted to win Salesperson of the Year in her Target Market in 2021, Sarah is nonetheless adamant that her greatest career achievement thus far was “being considered a specialist within my industry and by my peers at a global level.”

At Sika, we believe our workforce’s diversity is key to our success as a global building products manufacturer. We employ people for their commitment to excellence, rather than gender, race or cultural identification. Women have proved themselves more than capable of forging a career in the construction industry, displaying the requisite skills to flourish in many aspects of the sector. Their influence will be crucial to our future built environment.